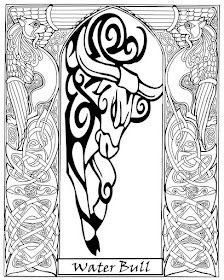 The water bull, also known as tarbh uisge in Scottish Gaelic, is a mythological Scottish creature. Generally regarded as a nocturnal resident of moorland lochs, it is usually more amiable than its equine counterpart the water horse, but has similar amphibious and shapeshifting abilities.

What follows are some descriptions and tales from old sources:

The WATER-BULL is like a common bull, though he is amphibious and supernatural, and has the power of assuming other shapes. He may have been a buffalo, or bison, or bos primogenious long ago; or even a walrus, though mythology may have furnished his attributes. There were human-headed bulls at Nineveh, and sacred bulls in Egypt, which had to do with inundations. Bulls are sculptured on ancient Scotch stones; and there is a water-bull in nearly every Scotch loch of any note. Loch Ness is full of them, but "they never go up to the Fall of Foyers."

In one of the islands here (Islay), on the northern side, there lived before now a great farmer, and he had a large stock of cattle. It happened one day that a calf was born amongst them, and an old woman who lived in the place, as soon as ever she saw it, ordered that it should be put in a house by itself, and kept there for seven years, and fed on the milk of three cows. And as everything which this old woman advised was always done in the " bailie," this also was done. (It is to be remarked that the progeny of the water-bull can be recognized by an expert by the shape of the ears.) A long time after these things a servant girl went with the farmer's herd of cattle to graze them at the side of a loch, and she sat herself down near the bank. There, in a little while, what should she see walking towards her but a man (no description of him given in this version), who asked her to  fasg his hair. She said she was willing enough to do him that service, and so he laid his head on her knee, and she began to arrange his locks, as Neapolitan damsels also do by their swains. But soon she got a great fright, for, growing amongst the man's hair, she found a great quantity of Liobhagach an locha, a certain slimy green weed that abounds in such lochs, fresh, salt, and brackish. (In another version it was sand.) The girl knew that if she screamed there was an end of her, so she kept her terror to herself, and worked away till the man fell asleep, as he was with his head on her knee. Then she untied her apron strings, and slid the apron quietly on to the ground with its burden upon it, and then she took her feet home as fast as it was in her heart. Now when she was getting near the houses she gave a glance behind her, and there she saw her caraid (friend) coming after her in the likeness of a horse. He had nearly reached her, when the old woman who saw what was going on called out to open the door of the wild bull's house, and in a  moment out sprang the bull. He gave an eye all round about him, and then rushed off to meet the horse, and when they met they fought, and they never stopped fighting till they drove each other out into the sea, and no one could tell which of them was best. Next day the body of the bull was found on the shore all torn and spoilt, but the horse was never more seen at all.

The bull was large and black, he was found groaning in a peat hag, and was helped by the girl's lover, who brought him food, though he suspected him to be the water-bull. The girl was dark-haired and brown-eyed, and the farmer's daughter. Her lover was an active Highland lad, and a drover, who went by the name of Eachan coir nan ord, " Gentle Hector of the hammers," and he was fair-haired. There was a rejected rival suitor who takes the place of the water-horse, who threw his plaid over the girl's head when she is at a shealing, and carried her off, but the black water-bull rushed in just at the nick of time, crushed the wicked wooer to the earth, invited the lady to mount on his back, and carried her safely home, when he disappeared, singing:

Aid came to me by a gentle youth.
And to a maiden I brought aid;
After three hundred years of my hard age,
Give me my freedom without delay.

This animal, unlike the Water-horse, was of harmless character, and did no mischief to those who came near its haunts. It staid in little lonely moorland lochs, whence it issued only at night. It was then heard lowing near the loch, and came among the farmers' cattle, but was seldom seen. Calves having short ears, as if the upper part had been cut off with a knife, or, as it is termed in Gaelic, Carc-chluasach {i.e. knife-eared), were said to be its offspring. It had no ears itself and hence its calves had only half ears. In the district of Lorn, a dairy-maid and herd, before leaving in the evening the fold, in which the cows had been gathered to be milked and left for the night, saw a small ugly very black animal, bull-shaped, soft and slippery, coming among the herd. It had an unnatural bellow, something like the crowing of a cock. The man and woman fled in terror, but, on coming back in the morning, found the cattle lying in the fold as though nothing had occurred.

Superstitions of the Highlands & Islands of Scotland, Collected entirely from Oral Sources, By John Gregorson Campbell, Minister of Tiree, 1900

So far we have been dealing with water-spirits more or less human in form. Another class consists of those with the shape and attributes of horses and bulls. The members of this class are connected specially with Highland districts. Lonely lochs were their favorite haunts. In treeless regions, a belief in such creatures would naturally arise. Any ordinary animal in such an environment would appear of a larger size than usual, and the eye of the beholder would transmit the error to his imagination, thereby still further magnifying the creature’s bulk. In some instances, the notion might arise even when there was no animal on the scene. A piece of rock, or some other physical feature of the landscape would be enough to excite superstitious fancies. Mr. Campbell remarks, “In Sutherland and elsewhere, many believe that they have seen these fancied animals. I have been told of English sportsmen who went in pursuit of them, so circumstantial were the accounts of those who believed they had seen them. The witnesses are so numerous, and their testimony agrees so well, that there must be some old deeply-rooted Celtic belief which clothes every object with the dreaded form of the Each Uisge, i.e., Water-horse.” When waves appeared on a lake, and there seemed no wind to account for them, superstitious people readily grasped at the idea that the phenomenon was due to the action of some mysterious water-spirit. As Dr. Tylor points out, there seems to have been a confusion “between the ‘spiritual water-demon’ and the ‘material water-monster.’ Any creature found in or near the water would naturally be reckoned its guardian spirit.

The Rev. Dr. Stewart gives the following particulars about water-horses and water-bulls in his “’Twixt Ben Nevis and Glencoe.” They are thought of “as, upon the whole, of the same shape and form as the more kindly quadrupeds after whom they have been named, but larger, fiercer, and with an amount of ‘devilment’ and cunning about them, of which the latter, fortunately, manifest no trace. They are always fat and sleek, and so full of strength and spirit and life that the neighing of the one and the bellowing of the other frequently awake]the mountain echoes to their inmost recesses for miles and miles around …. Calves and foals are the result of occasional intercourse between these animals and their more civilised domestic congeners, such calves bearing unmistakable proofs of their mixed descent in the unusual size and pendulousness of their ears and the wide aquatic spread of their jet black hoofs; the foals, in their clean limbs, large flashing eyes, red distended nostrils, and fiery spirit. The initiated still pretend to point out cattle with more or less of this questionable blood in them, in almost every drove of pure Highland cows and heifers you like to bring under their notice.”

The lochs of Llundavrà and Achtriachtan, in Glencoe, were at one time famous for their water-bulls; and Loch Treig for its water-horses, believed to be the fiercest specimens of that breed in the world. If anyone suggested to a Lochaber or Rannoch Highlander that the cleverest horse-tamer could “clap a saddle on one of the demon-steeds of Loch Treig, as he issues in the grey dawn, snorting, from his crystal-paved sub-lacustral stalls, he would answer, with a look of mingled horror and awe, ‘Impossible!’ The water-horse would tear him into a thousand pieces with his teeth and trample and pound him into pulp with his jet-black, iron-hard, though unshod hoofs!”
MacCulloch, the author of “A Description of the Western Islands of Scotland,” found the belief in the water-bull a living faith among the people, notably among the dwellers beside Loch Rannoch and Loch Awe. He tells of a farmer who employed his sons to search a certain stream for one of these creatures, while the farmer himself carried a gun loaded with sixpences to be discharged when the monster appeared, silver alone having any effect on such beasts.

In the Isle of Man the water-bull was, and perhaps still is believed in by the peasantry. It is called in Manx, tarroo-ushtey. There is much force in Mr. Campbell’s conclusion that the old Celts reverenced a destroying water-god, to whom the horse was sacred, or who assumed the form of a horse. A similar notion may have originated the belief in the water-bull.

Folklore of Scottish lochs and springs, By James M. Mackinlay 1893